Since the last time I was in the Biblioteca Nacional, they have changed over to using gender-specific "reader" stickers. I asked the woman at the desk, and she said the change was fairly recent, that someone had complained and so they made a change. Instead of everyone getting a "lector" sticker, now the women get "lectora" stickers. But, as it's been said, I love the old way best... when we, too, were strong as men. 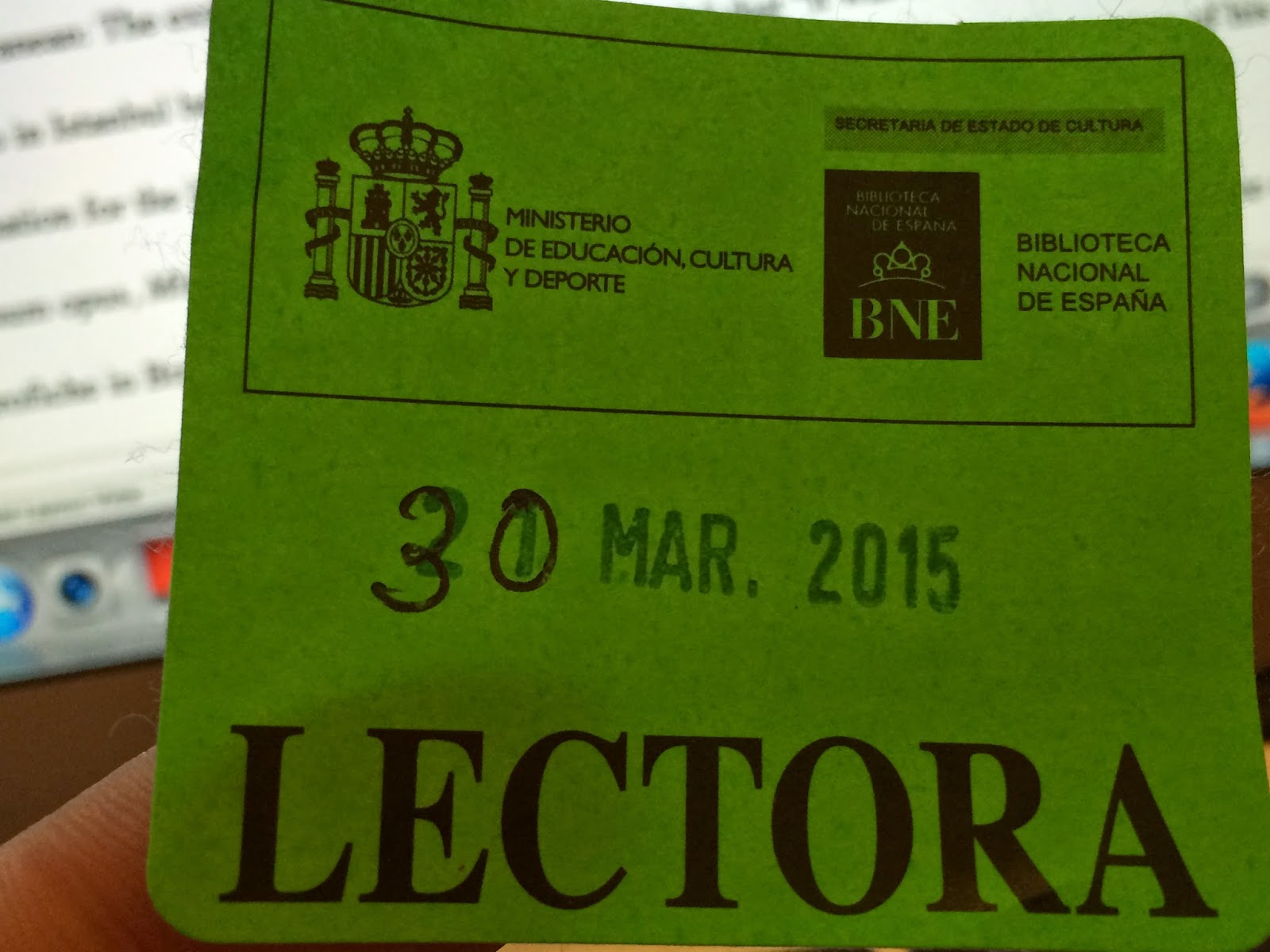 Edited, 3/31/15, to add: It occurs to me, sitting here now with an alarming neon orange "lectora" sticker stuck to my dress, and perhaps only because I'm going to a conference in the fall on the possibility of recovering female authorship from the documentary vacuum of the Middle Ages, that the rate of usage on these stickers will probably be useful to a historian someday in assessing usage of the library by gender...
Posted by S.J. Pearce at 4:55 PM No comments:

Email ThisBlogThis!Share to TwitterShare to FacebookShare to Pinterest
Labels: BNE, library, madrid, women in the academy 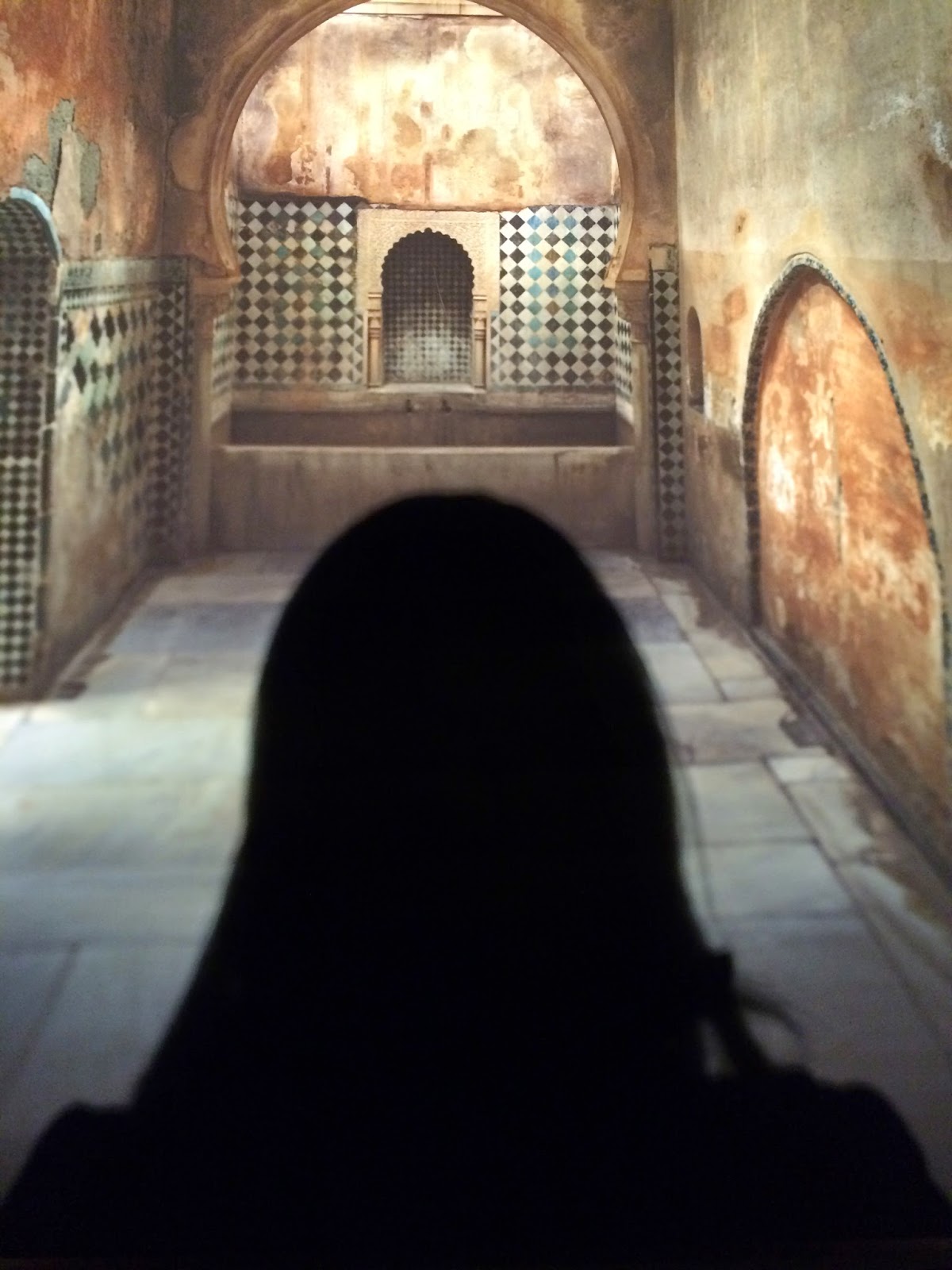 I've not been in Spain since the reopening of the National Archaeological Museum, and so it was high up on my list of things to do while here. Added incentive was the special exhibition called "Una visión inédita de la Alhambra," which tackles the idea of Alhambra photography, and not just the Alhambra itself, as an object of fetishization in the art world. 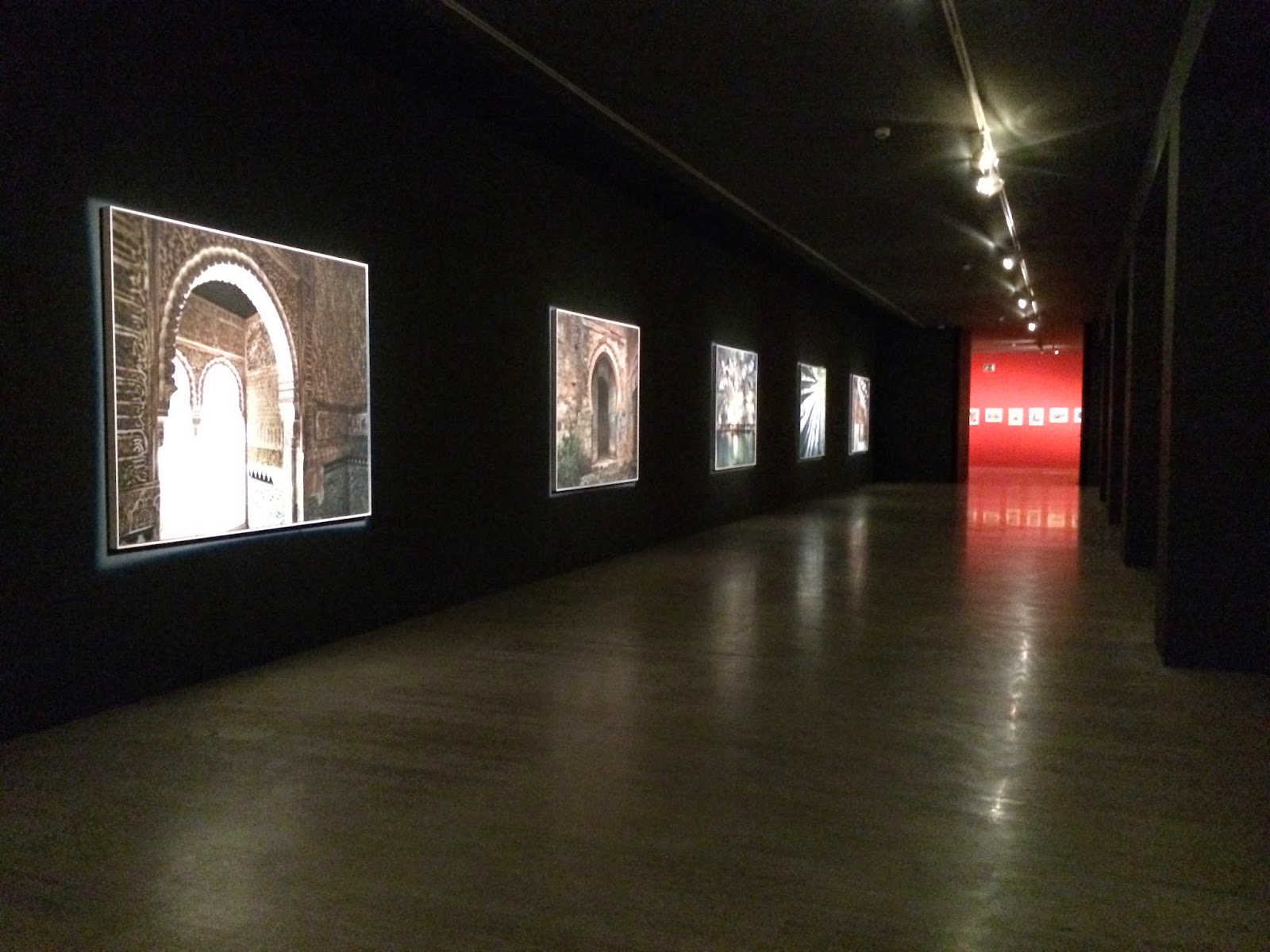 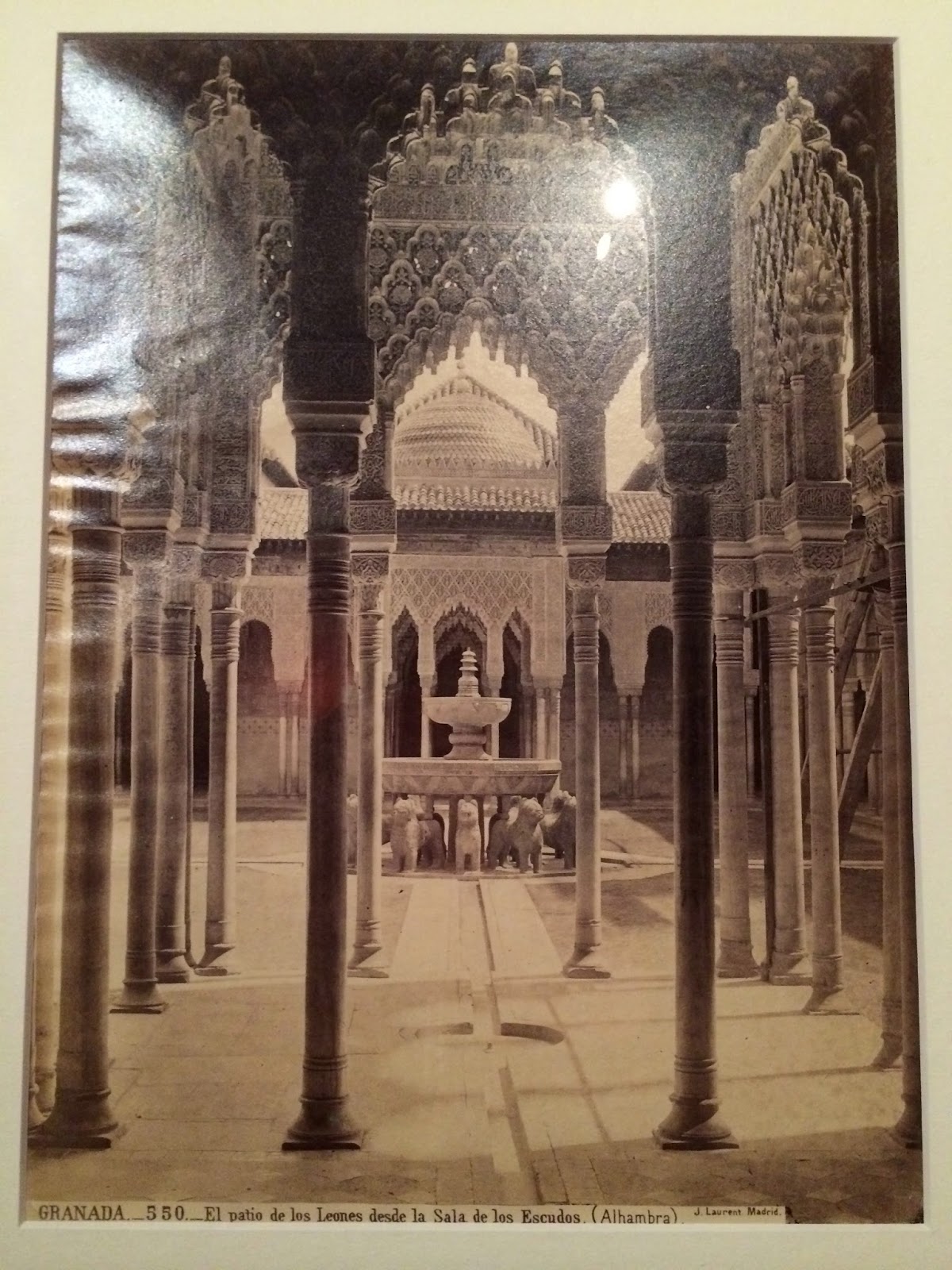 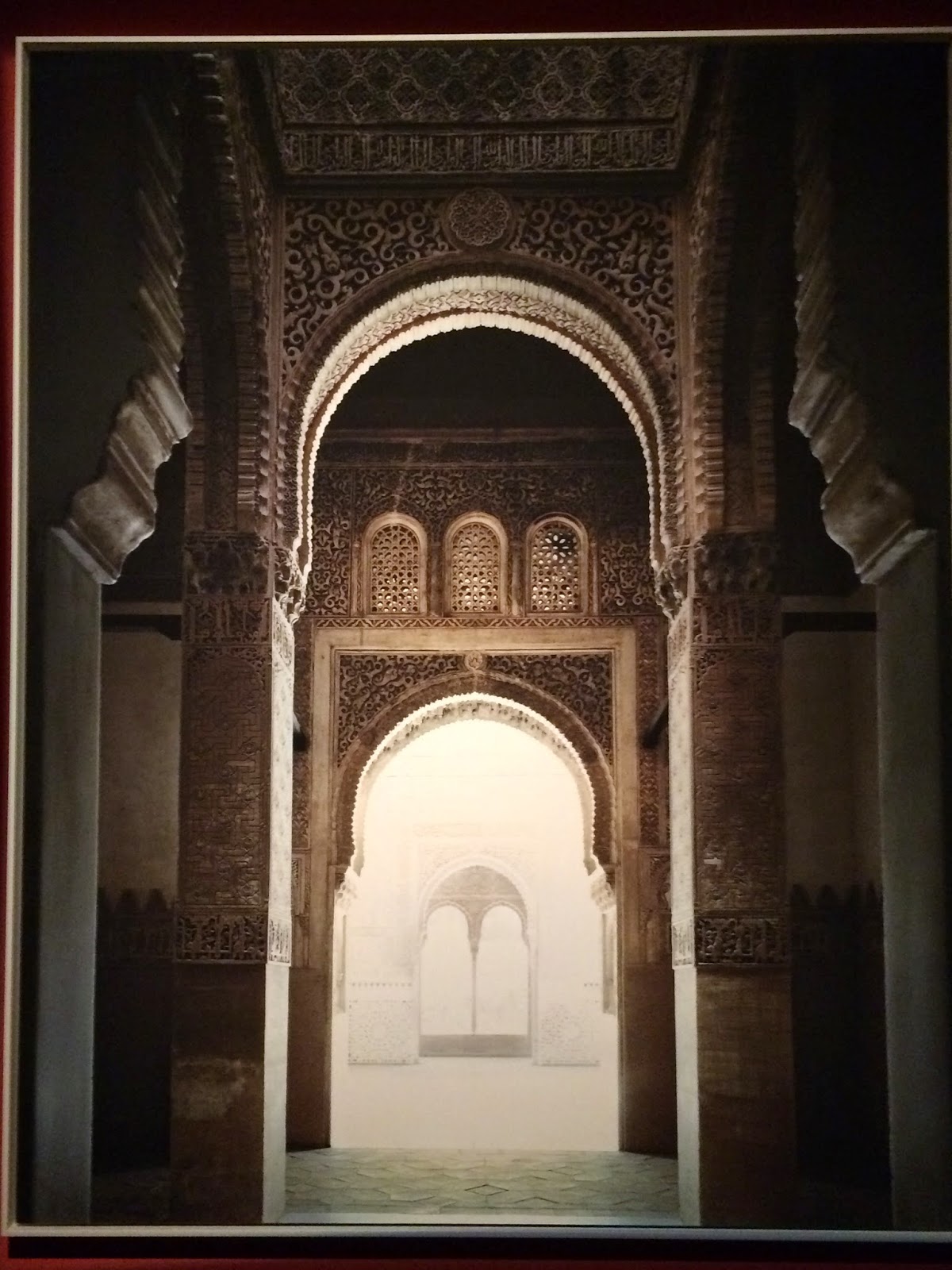 Manso photographs with a large-format camera and the images being shown all had a very narrow depth of field that almost gave them more in common with old etchings and engravings representing the place rather than the historical photography that was pointedly documentary.

But even as his photography deliberately alludes to (and, in fact, uses) older technology, this exhibition showed his photographs not printed but, rather, projected digitally onto the wall. It had a strange effect. Because just as the interplay between hard and soft focus forced by the depth-of-field issue invited the viewer to look more closely at the images, stepping right in front of them, necessarily between the projector and the image, casts the viewer's shadow onto the wall. 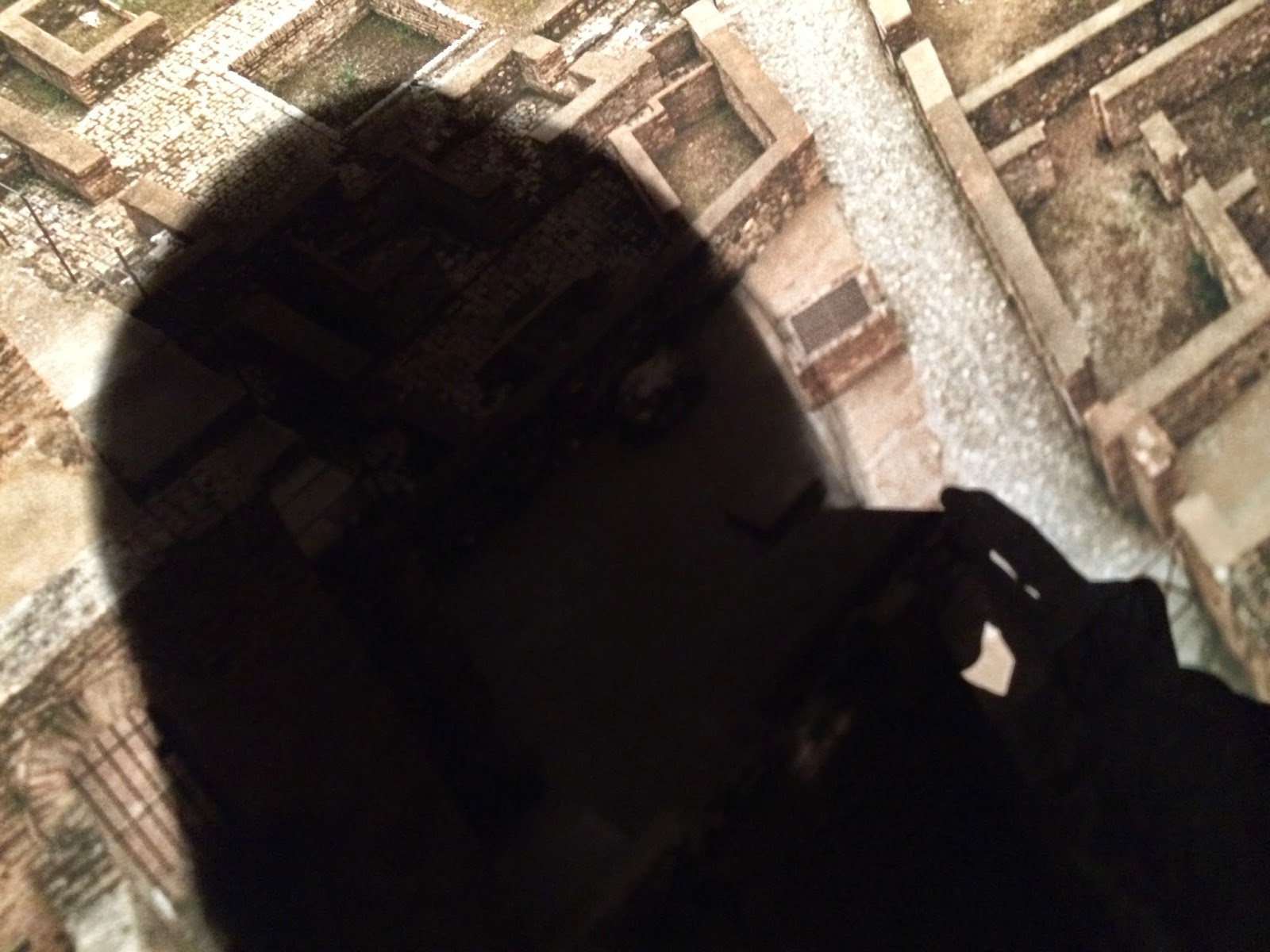 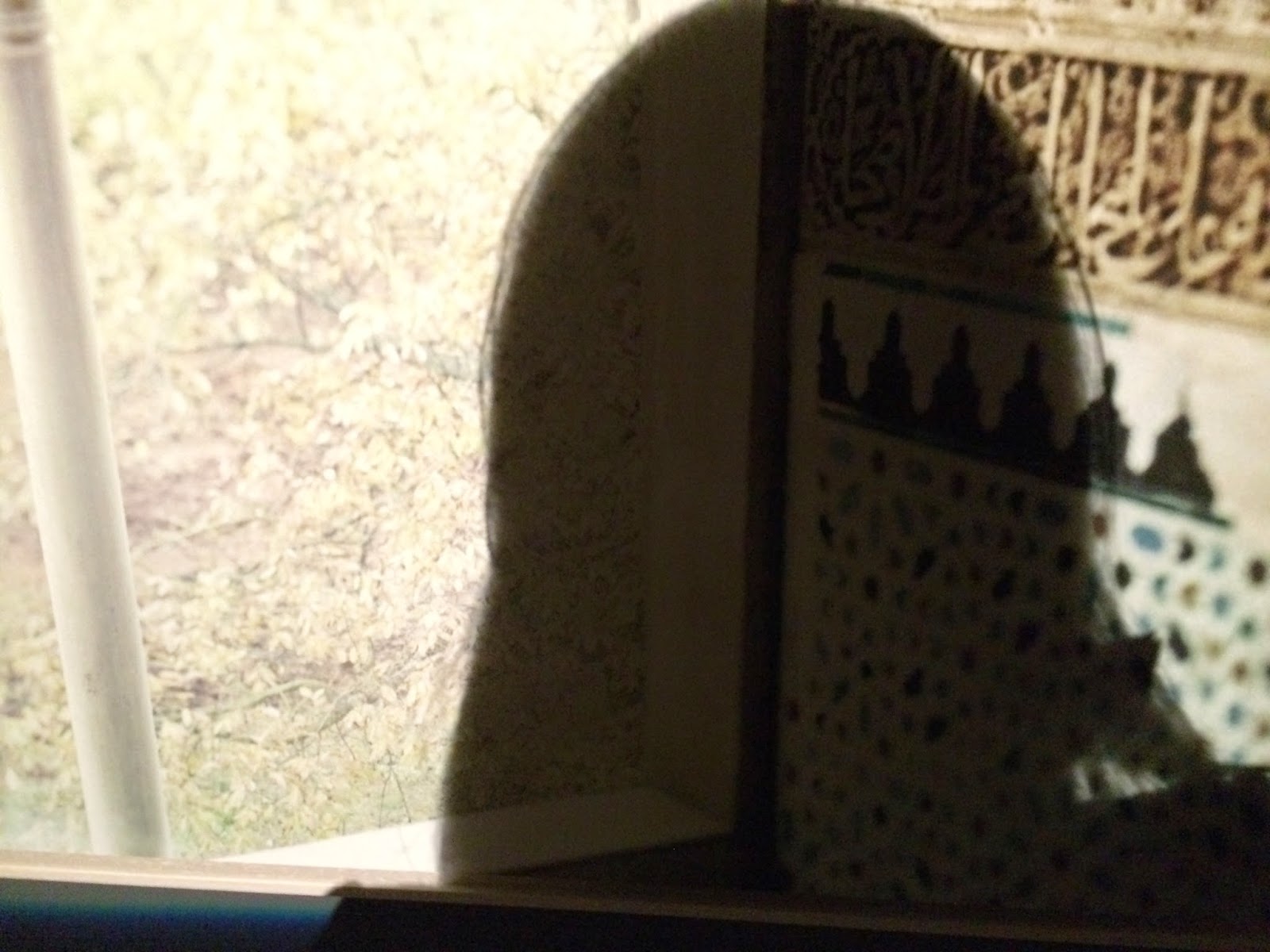 It's an awful way to look at photographs, but it does make the point that the act of looking at the building and the records of the building changes the way we look at it, and so in that respect it was a successful decision.

There is a small exhibition at Madrid's Casa Sefarad of glass lamps found during the excavation of the fifteenth-century synagogue in the medieval city of Lorca. 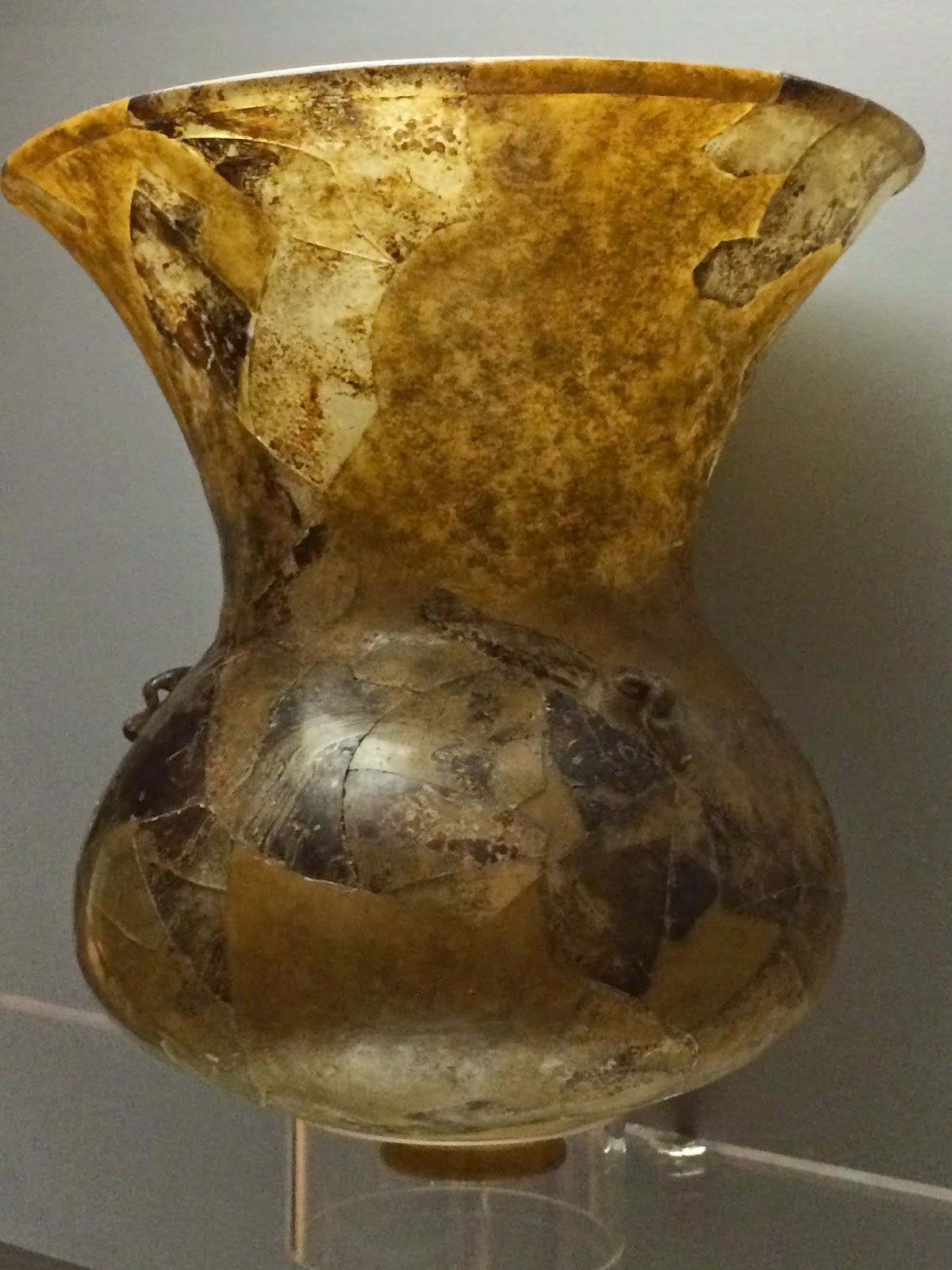 They were all in serious need of reconstruction; striking, though is the extent to which they have the same shape as mosque lamps from other Mediterranean sites. 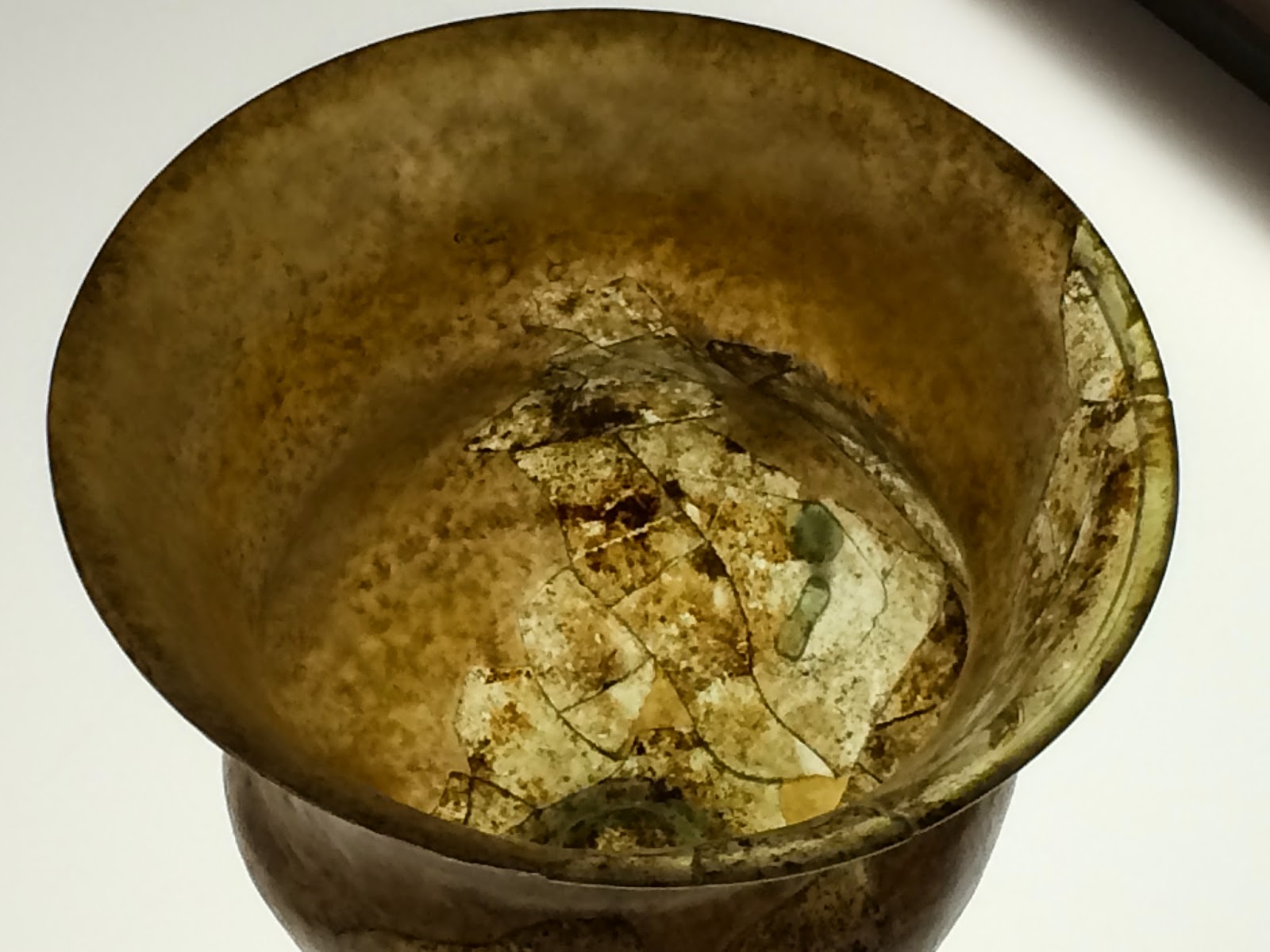 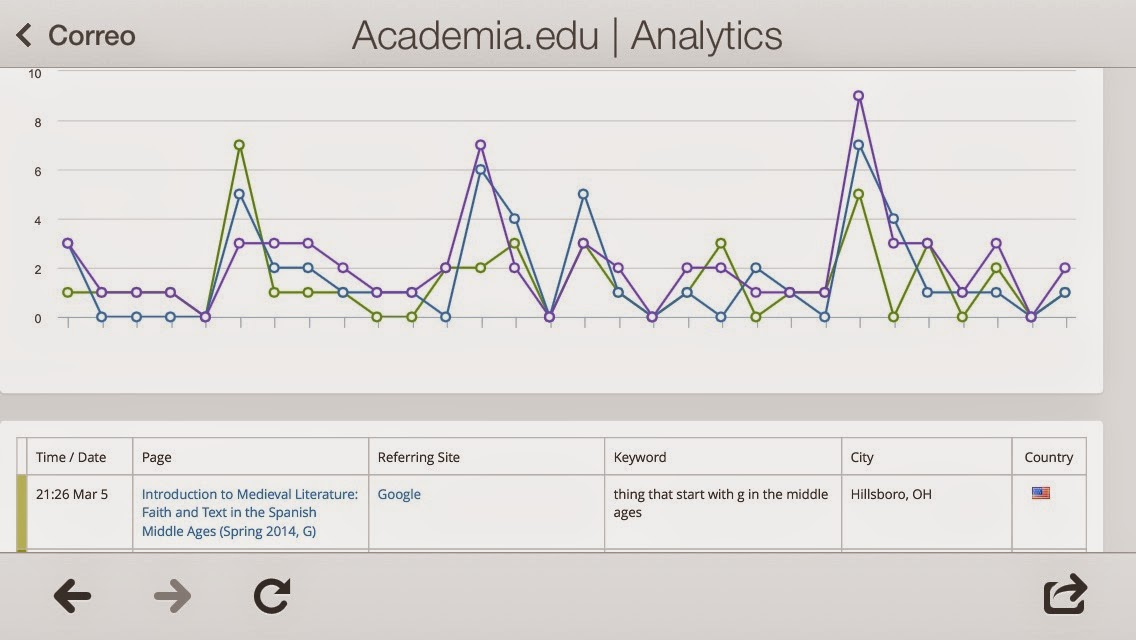 I'm not sure what someone in Ohio was hoping to find with the search "things that start with G in the Middle Ages" but I have to suspect that my Graduate seminar syllabus was not it. Some alternative suggestions include: Greaves, gold, game pieces, Gothic architecture, gargoyles, grotesques, Ghaznavids, gravestones, German, grammar, ghazal, genizah, graffiti, Great Mosque.

I've been a bit frustrated with the Medieval Academy of America, one of the scholarly organizations for medievalists, as it has been holding its annual meeting this week. The bits and pieces of the annual convention that have been coming across Twitter — and those that, crucially, have not — have painted a pretty bleak and alienating picture. I recognize that I'm getting the positive doubly or trebly mediated through listeners at the conference and their social media feeds, but the negative is (not) coming straight from the organization.

I applied for a grant for junior scholars that the MAA was administering, and also submitted my first article for consideration for their best first article award. I wasn't expecting to get either — it's a numbers game, it's mostly an organization for Latinists and not for Arabists or Hebraists, I don't think that well of myself, etc. — and I didn't. But the only way that I know that is via the total radio silence from the organization. Nobody at the Medieval Academy bothered to notify unsuccessful applicants prior to the meeting where the prizes would be announced. I found out about the first article award because the journal where the best article appeared posted the news; and I still don't know who received the grant or for what project. The MAA tweeted the fact that it was being announced but left out the relevant data and didn't respond to a direct query. They're now busy sharing detailed information about plaudits to senior scholars that already appeared on their web site before the meeting even started. None of the prize information has been updated on their site.

It's helpful to publicize information about successful grant applications to give people who might reapply a sense of what the adjudicators are looking for. But it's that's not what's left me in a medium-grade bad mood over the last two days, watching the meeting transpire from afar. It seems petty to complain about not being notified that an application has failed or stalled when there are so many greater problems with the state of the academy, but in fact it's all part of the same thing. This kind of radio silence telegraphs a serious disregard of the pool of applicants, in this case junior scholars.

In a profession where so much of a person's worth depends on what other people believe it to be, where we all question ourselves and feel like imposters even at our very best, it's especially insidious to ignore junior people from the top-down. I already intuited that my work didn't measure up; now I know that I do not even merit acknowledgement. I don't think that reinforcing the low-man position, the disposability, of junior faculty is the role that a scholarly organization should be taking. My impression was that these organizations were meant to be on the side of their members in a wider academy that might treat us as worthless.

I don't like feeling like my only real choice is to be an insider by implicitly accepting that junior faculty are disposable and ignorable; I don't want to have to accept that for myself, for my peers, or for the people who might one day be junior to me. But I don't like the alternative, either, which is to reject the framework and be a kind of perennial outsider. I can embrace not fitting in — after all, I am the odd-duck medieval Arabist in the back corner of my home, a thoroughly modernized Spanish department —  but at the same time a certain kind of rejectionism doesn't seem to be an intellectually or professionally productive out in the wider academic world.

I don't think I have a choice, though. What am I supposed to do in a group where the best advice I can get about how to help the discipline and the profession along is 1) to be polite to scholars working in later periods and 2) to stop screwing around and drinking coffee and to actually do something instead when I meet with other junior colleagues in other discipline and (in tweets I didn't screen-cap) 3) to work with people in other disciplines like anthropology and linguistics and 4) to leverage popular interest in the Middle Ages for programmatic purposes?

These are all things that I am doing already and that all the young medievalists I know are doing.

Maybe the folks at the top should try talking to some junior scholars and junior faculty before simultaneously writing us off and condescending to us.

Maybe it's too much to expect a scholarly organization to be a refuge from the indignities of the rest of the academy, but I do believe that some of that is necessary to foster the basic level of intellectual and scholarly dialogue. I'm not railing against heirarchy; I'm not asking to be treated like the vaunted senior faculty; I know I'm junior and have to pay my dues to the profession; but I don't think it's too much to ask for some very basic acknowledgement when I speak (or write an application). Otherwise, I'm just left shouting into a void. And while I'm stubborn, I'm not so stubborn that I'll keep standing there, shouting into the dark for very long. I'll stay a member of the Medieval Academy if for no reason other than to continue receiving the journal, Speculum, which I do read and use to keep up with books published and reviewed in my field. But as junior faculty still struggling a bit to figure out which scholarly organizations and groups really represent her professional home and house her best interlocutors, I think I can strike one more possibility off the list. I don't think this is my crowd.

Email ThisBlogThis!Share to TwitterShare to FacebookShare to Pinterest
Labels: the profession