In This Land as in a Kingdom of Ishmael 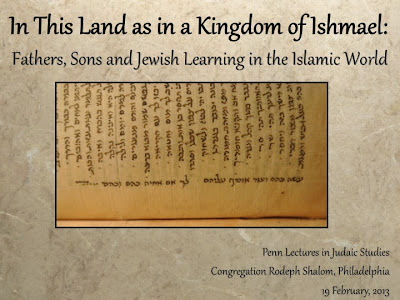 A talk open to the general public,
Delivered at Congregation Rodeph Shalom, Philadelphia, 2/20/13

A few months ago, I had a conversation with a gentleman who is about my grandfather’s age. He was telling me about taking New York State Regents’ Exams as a yeshiva student in the 1940s and how, in spite of having had to learn geometry on his own because there was no teacher for that subject in his yeshiva, he earned a 96 out of 100 on the statewide exam. Proud, he raced home to tell his immigrant father. At this point, I interrupted his story because I knew exactly where it was going: “Your father asked you what happened to the other four points, right?” He answered me: “No, my father asked why I couldn’t get a 100.” Even though I graduated from a secular public high school in a different millennium from this man, and even though not only are my parents not immigrants but most of my great-grandparents were not even immigrants, he and I had a shared, very culturally American Jewish experience of bringing home not quite good enough really good exam scores and being interrogated about them. And even though I knew that my parents were mostly joking when they asked what happened to those last four points I had failed to earn, the persistence of that question also helped to instill two important values in me: the importance of succeeding in education, and the importance of a sort of filial piety — making my parents proud by that very same success.
It turns out that variations on that question — Why couldn’t you get a 100? — go back a lot farther than the Lower East Side in the 1940s. And these questions are not only asked by American Jews who speak English, like my parents, or Eastern European Jews speaking Yiddish, like my elderly friend’s father, but also by Jews whose parents spoke Arabic because they lived in places whose culture was informed by the Muslim leadership of their lands. As far back as antiquity, there are examples of sons bringing home the Hellenistic or Byzantine equivalent of a 96 on the Regents’ Exam and their fathers saying, “What happened to the other four points?” What I’m going to speak about tonight is an example of this question that occurs in the Middle Ages, at the end of the twelfth century. This questions is, in equal measures, an indication of the value that Jews living in and in exile from Islamic lands placed upon what today we might call religious and secular types of education, of the importance of family relationships, and also of an issue that is of special importance to us as Reform Jews in the twenty-first century: the question of assimilation into and within a wider non-Jewish culture.
Read more »
Posted by S.J. Pearce at 1:19 PM 2 comments:

Putting Islam in the Title

Tonight is the infamous "That sounds very interesting but could you put the word Islam in the title?" talk.

I went to the web site of the congregation where I'm speaking to grab an image of their sanctuary, which is built in what is referred to as Byzantine-Moorish Revival style as a way of driving home and making very concrete the idea that you can't always tell what a building is based on its architectural style. It's really a very small point at the start of my talk, but I thought that this would be a good way of engaging the group very much on their own terms.

Much to my surprise, I learned that I am giving a talk entitled "Understanding Islamic History."

I suppose I should have seen it coming. Regardless, I suspect I'm going to be facing a lot of very disappointed little old ladies.

Email ThisBlogThis!Share to TwitterShare to FacebookShare to Pinterest
Labels: trying to deal with normal people

Joining the Ranks of the Popularizers and Hybridizers

At the infamous roundtable at the start of the year, the one where we came to the inescapable conclusion that while there is lots of interesting stuff happening in various parts of the worlds at various times that include the years 1198-1304, ultimately the thirteenth century, the theme for the year, is not a valid critical category, one of the fellows took a gratuitous swipe at the vision of the middle ages presented in a book that was written for a general audience and has become popular for teaching undergraduates and recommending to interested lay readers. Without defending the book or its author, I suggested that perhaps that book and its overarching themes didn't belong in a scholarly conversation amongst social, intellectual and material historians and scholars of literature and mysticism working from the middle of the twelfth century well into the fifteenth with no common research language and spanning the earth from the Islamic world through Ashkenaz, all struggling to figure out the terms of an academic conversation meant to last a full year.

Email ThisBlogThis!Share to TwitterShare to FacebookShare to Pinterest
Labels: academic writing, gathering thoughts for things that will eventually be essays, trying to deal with normal people

"This Was Corrected Against My Own Books."

In the name of public outreach, I have made Moses Maimonides' signature glow red.

I am preparing to give a talk to a general audience next week, and I find that lay people are usually suitably impressed when they are shown the actual handwriting of the actual Rav. To be fair, the first (and only) time I was taken by a friend to the Genizah Research Unit at the Cambridge University Library, I was pretty bowled over, too, when one of the researchers brought out a letter written in Maimonides' own hand.

This may not have been exactly what the folks at the Bodley had in mind when they digitized their copy of the Mishneh Torah, the one that Maimonides himself authorized as having been corrected against his own books (as the little portion of the colophon shown above attests). But the digitization project happened exactly so that a wide range of people, and only scholars, could have access to the book — the same outreach-y type goal, something I'm sure to be thinking about more in this space over the course of the next few days.

The rationale is based in a sort of forerunner to the famous will of Albert Barnes, which stipulated that his collection be forever displayed exactly as it was upon his death. With perhaps a similar educational mission in mind, an owner of the codex stipulated in his will that it be made available to anyone who wanted to correct his own copy against it. And, as you'll see on their web site, it's something that the library has taken seriously, with digitization being the next logical step.

I do think it says something amazing about the collective collecting and archival ethic at the Bodley that they would take so seriously the will of someone who could easily have been written off.

This week's damage. (Well, actually, the damage from about three weeks ago. It just took this long to get here from Japan.) 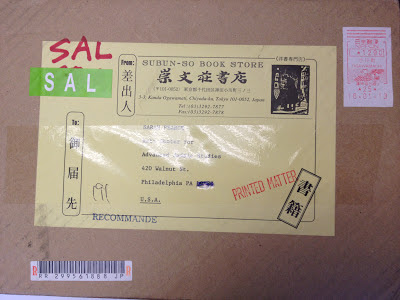 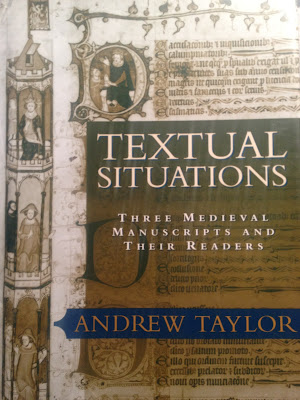 Translation Diary, Entry #13 (which comes after entry #14 owing to an accounting error)

I hadn't noticed it any of the other times I'd read the book before this, but apparently the problem of how to translate "Historia" with a capital letter H is going to persist throughout the whole of this work. This time, I have rendered the sentence "...es possible que en ambos casos la Historia nos haya legado una mentira" as "...but another possibility is that in both cases "history" has left us only lies." I hate scare quotes, but it seems like a typographic solution to a typographic problem isn't necessarily a bad way to go.
Posted by S.J. Pearce at 1:16 PM No comments:

The New York Times ran an op-ed piece this weekend in which a teacher wrote about reading Macbeth with her students. The line, "I've had to remind kids it's not the Super Bowl; there's no cheering in reading" bothered me from the get-go. Why would you dampen the enthusiasm of a kid falling in love with literature, especially literature that doesn't appeal to many middle schoolers? It didn't take long for her to be proven wrong on the world stage, either. At the conclusion of the press conference this morning that announced the identification of the remains of Richard III, the Plantagenet king perhaps most famously recalled in Shakespeare's eponymous play, the room broke into whoops and applause.

Of course there is cheering in reading.

The scientific and historical teams that worked on the project of identifying the human remains found in the architectural remains of what was believed to be the old Greyfriars church in Leicester took full advantage of the suspense of their press conference to give a really thoughtful look at the scholarly process and to show off to the public the value not just of history but of the painstaking research that it takes to write it. One of the geneticists mentioned the "blind alleys" that the project had sometimes taken him down — this sort of thing is never the straight path with the neat "aha!" moment that it looks to be on TV.

Even better, a historian spoke about reconciling contemporaneous and later chronicles with the new material evidence. She did a close reading live on the BBC, pointing out particularities of Latin adjectives used to describe Richard III, talking about narrative voice and authorial intention. Careful reading of text  took center stage on the news. There was history and there was New Historicism.

Yes, there are questions  about the significance of the discovery. They'll be chewed over, I'm sure, in due time. But today, let's just let it be a really good day to be a medievalist and a cheerer of literature.
Posted by S.J. Pearce at 6:18 AM No comments:

What started as one insomniacal expression of dramatic tension and a few retweets and then one tweet of my own with a quotation I liked from the Richard III press conference turned into a full-on live tweeting of the thing. It was kind of fun, a way to feel like I was participating, and a good way to channel the excitement and suspense, but I'd definitely not want to live-tweet academic papers as some people do. Even putting aside the intellectual property issues, it pulls just enough attention away that following a press conference for lay people was no problem but I could tell I was just distracted enough that I'd have had a hard time if it had been an academic argument.

For the record, this is what my Twitter feed looked like at 6am, once it was all over, inverted for ease of reading (that is, no need to scroll to the bottom and read up — do click on the jump to see all of it, though):


Drunken prophecies, libels and dreams... It's so rare that "breaking news" and "medieval" occur in the same sentence. bbc.co.uk/news/uk-englan…
— S.J. Pearce (@homophonous) February 4, 2013