The Recent(ish) Past in Links

It's been a while since I've done a links round-up, since Twitter has mostly taken over that function; a few, recently, though, have left me wanting to comment in a little more than 140 characters. And this seemed like a pretty painless way to ease back into blogging after my hiatus of moving, giving talks, and just generally going through a boring phase.

This first link is kind of a lovely obituary, righting a historical wrong that had written a female academic out of the historiography. It's haunting, too, though, as a sort of ghost-of-Christmas future. I don't mean to sound macabre, but a single academic who sacrifices her entire life in the service of almost achieving something important only to die an untimely death before actually accomplishing her task is horrifyingly resonant to me right now. I have to wonder if what I'm doing, which isn't even as significant as deciphering an ancient language, is worth it.

Of the wide variety of writing on Gatsby, now with the movie coming out, these were two that spoke to me. The reasons for the first will be obvious given my academic and professional interests, and the second spoke to me as someone who always hated high school English, especially hated Gatsby in high school English, and only had Fitzgerald and English-langauge prose fiction redeemed for her by a really great history teacher.

Why I Despise The Great Gatsby

And amidst the flurry of new contributions to the DON'T-GO-TO-GRADUATE-SCHOOL!! genre (which I shan't list here), cooler heads defend the literature PhD:

Thesis Defense: No, It's Not a Waste of Time to Get a Literature PhD

In the fall I am going to be teaching a freshman honors seminar on the events of 1492, and one of the themes I'm particularly interested in teaching is the reuse of tropes applied to Jews and Muslims in Spain in classifying and describing the native populations in Latin America. I've even come across an article that quotes an early-modern Spanish adventurer as saying, "These Indians are Jews!" A new discovery and some new thinking in this area:

First Known Depiction of Native Americans may be in 1492 Painting

Speaking of cross-cultural contact presented in ways that will be useful for teaching, here are two recent news items. Together they make for a very different vision of cultural collaboration and hybridity:

Bradford Muslims Rally to Save Synagogue

And speaking (if only indirectly) of my syllabus:

IT'S IN THE SYLLABUS!

Okay. Having now shouted twice in one post, that's enough. Normal service, as they say, has been resumed as soon as possible.
Posted by S.J. Pearce at 6:25 AM No comments:

Email ThisBlogThis!Share to TwitterShare to FacebookShare to Pinterest
Labels: the week in links

I'm getting ready to give a paper at what promises to be a fantastic conference at the University of Chicago. (In fact, the lack of recent posting is down to this feeling like the stakes are high for a couple of different reasons, on top of moving back to New York this week.) 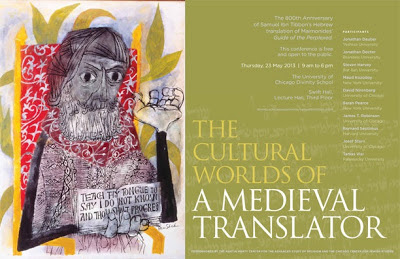 I'm presenting a weird and obscure text — naturally, because that's pretty much my portfolio — that's definitely not a classic. It's also Not A Classic in the sense that it conforms to the opposite of Calvino's definition of classics as texts that you already know and feel like you are re-reading even when you read them the first time. This is a text whose weirdness has contributed to its obscurity.

An inversion of the description of the reading process of a classic is quite apt for me in this instance, as well. Through a probably completely irreplicable series of events, I happened to read it for the first time with no context, no secondary scholarship, and without even knowing really what it was — it was bound in with another manuscript I was looking at in the Bodleian collection. It was a completely interesting exercise to read an interpret a text totally uninfluenced by and unresponsive to earlier thinking. And as it happens, my reading of this text runs totally against the grain of what almost all of the (not really voluminous) earlier scholarship says about it. Some of the earlier scholarship will be in attendance, too.  I'm nervous. It could go quite badly, but it could also go really well; and it's sort of exciting to have read this way.
Posted by S.J. Pearce at 9:34 AM 2 comments:

The theme of this year's Philadelphia arts festival was "The Time Machine," so there was a lot of imitation-medievalia out on Broad Street.

This is a choir dressed as Franciscans. I was glad somebody else had the nerve to ask. It was the sort of question that would have seemed really impertinent if they actually had been real friars. 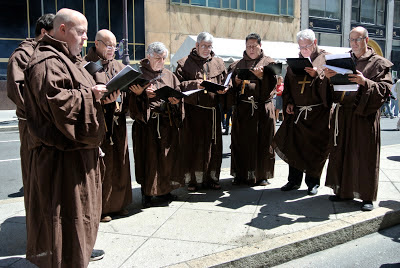 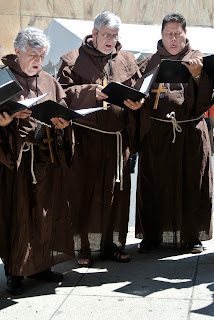 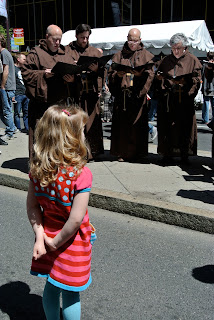 Also, textile arts and 1,001 non-foundry-related things to do with a bellows: 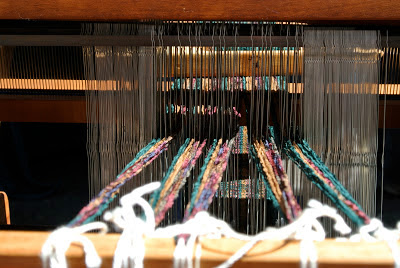 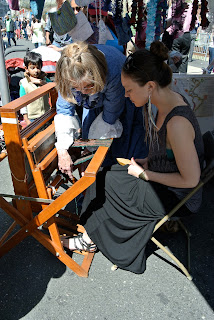 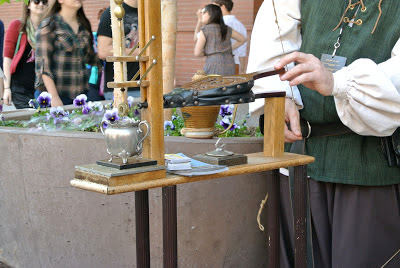 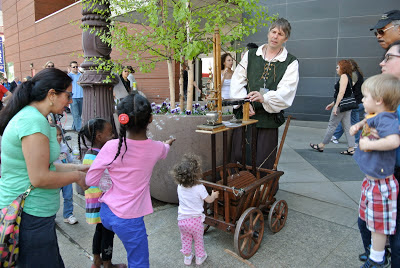