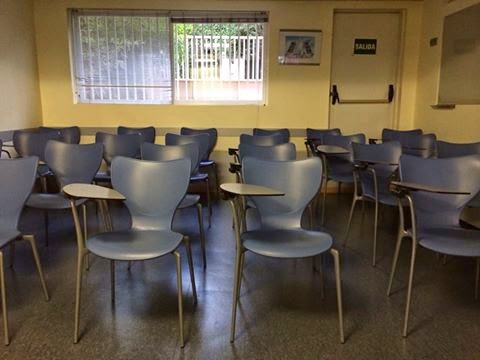 Current view from the front of my classroom. Because, really. Why would anybody think about taking a class on Spanish literature while studying abroad in Spain? That would just be silly.

Spanish departments often get pegged as "service" departments. They're places for warehousing masses of students who want an easy way to complete their language requirement because they've had some Spanish in high school or, because, let's face it, for an English speaker it is simply easier to learn Spanish and to attain something closer to proficiency in a few years than languages like Chinese or Arabic. And so there's often a defensiveness amongst the faculty members who populate those departments and an insistence — correct if, perhaps, protested a little bit too much — that this is not a place to just practice your Spanish.  But it's coupled with an insistence, to varying degrees, that literature be taught only in Spanish. There's a very delicate balancing act between insisting, correctly, upon proficiency in language, and making the content accessible and interesting.

I don't know that anywhere has that balance worked out perfectly; and so we end up losing a lot of students to this notion that first you learn a language, and then you can read literature in that language, and until then, no literature for you. It's an idea that quietly, though not at all subtly, reinforces the notion that language and literature are two separate things. And so you end up with a situation like the one I have, where there are students who are studying abroad in Spain who have no interest in taking a Spanish literature course. They're here to practice their Spanish and to learn about Spain, and literature is that other thing.

Email ThisBlogThis!Share to TwitterShare to FacebookShare to Pinterest
Labels: in the classroom, madrid

I've been in Madrid for a week now, most of which has been spent thoroughly knocked off my feet by a combination of jet lag and the chest cold I seem to have picked up on the plane. I was expecting it to be a huge challenge to buy cold medicine here just because not only do the brand names of drugs differ, but even the generic names are not always the same. (For example, what we call acetaminophen, most of the rest of the world calls paracetamol.) However, as someone with multiple serious drug allergies, I do a fair amount of research and label-reading even in the US before I buy any kind of new medication; and this wasn't really any different than my normal practice.

This is coming to a point, I promise.

In the course of finding out that the cough suppressant guaifenesin is, in Spanish, just called guaifenesina, I also learned that in its natural form, it is the resin of the guayacá tree, which is native to Santo Domingo. The resin was first brought to Europe by the Spanish conquerers (although they initially hoped it would be a promising remedy for syphilis...).

So, I've not really done anything particularly Madrid-y yet, but at least I am taking culturally and historically appropriate cold medicine.
Posted by S.J. Pearce at 5:08 PM No comments:

Email ThisBlogThis!Share to TwitterShare to FacebookShare to Pinterest
Labels: living the life, madrid

I say this as a person who has attended a live concert of a Sumerian Elvis impersonator: I'm really not sure what to make of the dead languages karaoke that's on the program for the Medieval Congress at Kalamazoo this year. 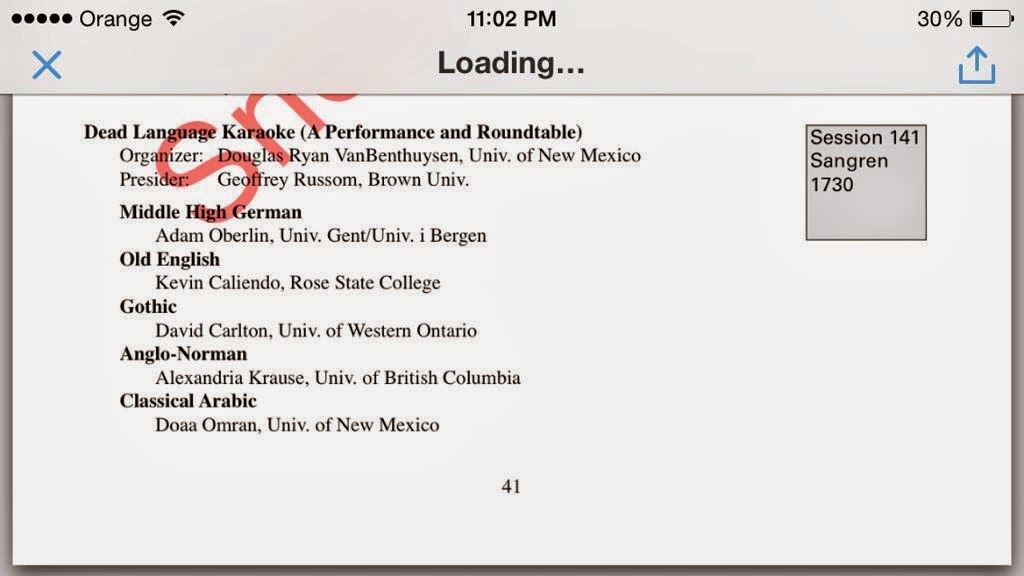 There is a lot of medievalism and neo-medieval kitsch on the program this year, more than I remember there being on past programs. My distaste for Game of Thrones aside, I'm rather fond of the neo-medieval: It's a predeliction that, in part, drives the teaching of the course I mention here most frequently, the one on modern representations of medieval Spain. I pride myself on having a pretty decent collection of medieval-kitsch board games. I'm even working on a medievalist (different from medieval) article right now. There is place for serious medievalism and goofy medievalism.

But there's something about dead languages karaoke (something that I'd normally be pretty amused about) as a formal session in the meeting . Does it tell us anything about medieval performance? What is it really trying to accomplish? Why isn't it just an optional activity? I think that's where I'm really ambivalent: Medieval Studies is still a field that takes itself very, very seriously. There's an awful lot of gatekeeping and disciplinary falling-into-line and intellectual conservatism, especially by and within its old and venerable institutions.

I think that it's important to take the material and the work very seriously and the profession and its trappings not so much; a session like this does the opposite, waving the trappings of Medieval Studies about like a banner without really making much apparent forward progress. It's a bit of an insult, then, that by virtue of its programming choices, one of these conservative, venerable institituions presents neo-medieval kitsch as more academically significant that large swaths of medieval work.

Kalamazoo isn't a meeting that I go to because (not unlike the Medieval Academy meeting, incidentally) the program is overwhelmingly focused on the Anglo-Norman, the English, the French, and the Latin. Jews and Muslims, by in large, figure into the scholarly discourse as objects represented by the English and the French. Arabic texts are sources for the mysticism and the philosophy that would take hold in various Latinate Christian communities. Spain is presented as though the last thirty years of scholarship and historical revision almost didn't happen.

And yet something as wonderfully goofy as dead languages karaoke is not an after-hours activity but is rather slotted into the program with a roundtable discussion. It's a vicious cycle: People like me don't go because it's very hard to get to Kalamazoo and hardly seems worth it for maybe two relevant sessions. But perhaps the cycle is fed by the appearance that neo-medieval kitsch is a higher intellectual and academic priority than large swaths of the academic medieval.
Posted by S.J. Pearce at 4:29 AM No comments:

The first in what I anticipate will be a recurring series.


And further proof that The Great American Sandwich is most definitely A Thing here right now, this was the cover of the menu where I ate lunch yesterday: 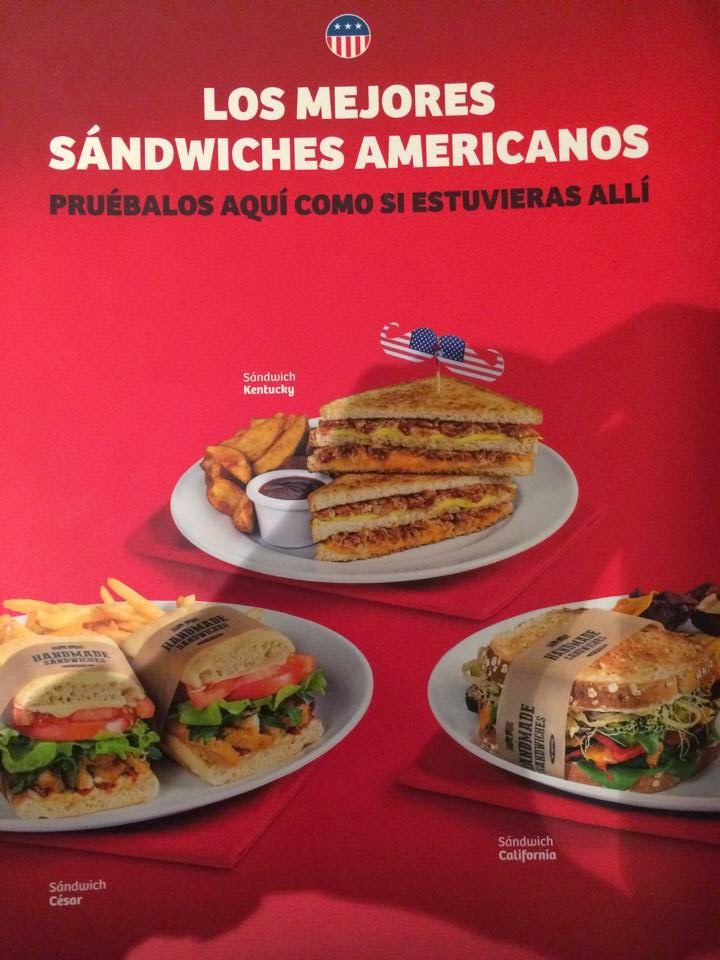 What We Learn from Cats. A book I spotted en route to lunch today. Written by one of the preeminent scholars of the Sefardi ballad tradition. Now in its third reprinting. 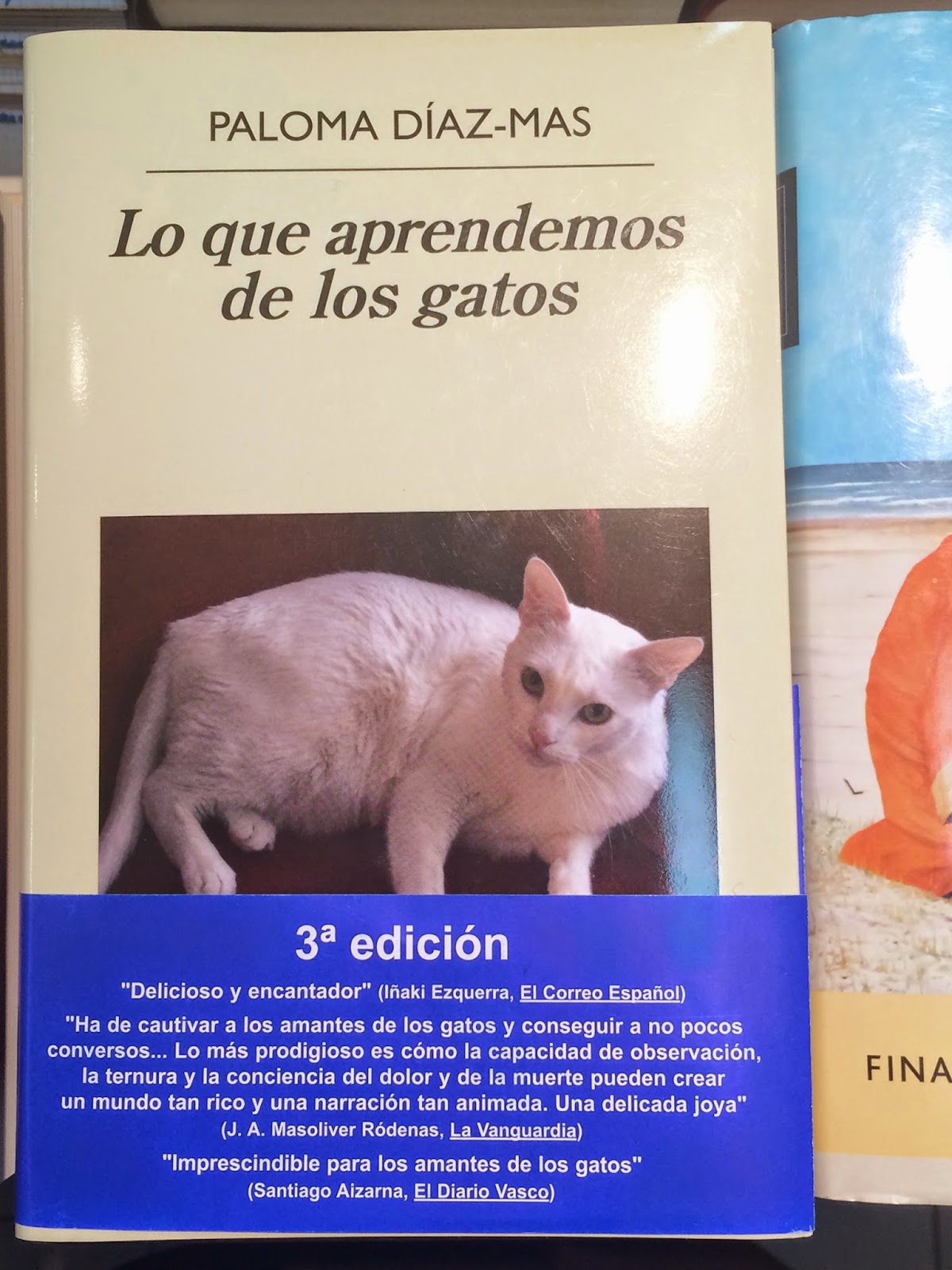 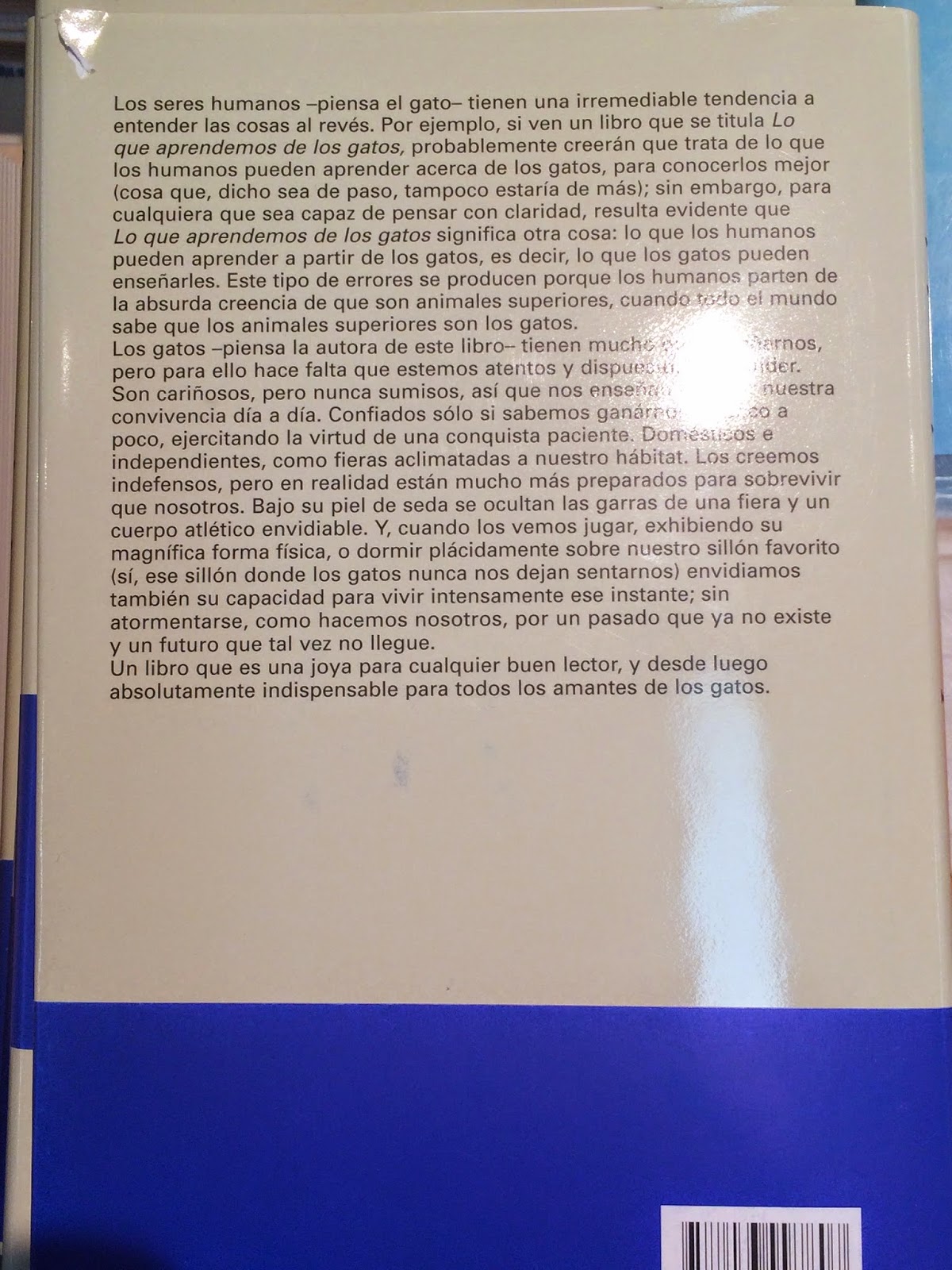 In certain respects, the Spanish academy is much more rigid than the American one, especially in terms of traditional disciplinary boundaries; but at the same time, it's much more tolerant of academics doing all different kinds of writing.

Random Bullets of Game of Thrones

I wasn't really interested in watching Game of Thrones. I should have been, apparently. All my medievalist friends have been watching it from the get-go, loving it, with many lauding its sophisticated use of medieval visual cues and literary history. It just never grabbed me; but now, since season 5 is being filmed at the Alhambra and since I teach a course on representations of medieval Spain in contemporary fiction, I started to feel some sense of professional responsibility to sit down and watch through it. I don't love it and don't feel like I've missed anything by not having watched it: the worst sort of fantasist neo-medieval kitsch with not a lot to redeem it in terms of plot or characters. I might or might not write more about it in the future, but for now, and possibly all ever, some quick thoughts at least as far as I'm up to, a few episodes into season 2.

— If there is a sophisticated use of medieval visual cues and literary history, then I'm missing it. And I'm not sure I am invested enough in it to watch all the episodes again with a more critical eye. (Plus, I don't think I"m missing it.)

— My initial reaction is that there are really too many beheadings and gratuitous, gory deaths to be able to use this in teaching. That said, I have a colleague who uses it for a mini-course, so it is clearly a feasible thing.

— The intention of the author doesn't matter. However, insofar as he has explained it (with all the usual caveats about the great Romantic poets having been too drunk to know what they were doing and so even an author's statement about his own intentions isn't to be trusted) George R.R. Martin's approach to the story is probably contributing to it not turning out very well. His basic approach appears to be ride on the emotional manipulation of the reader/viewer for its own sake: "I killed Ned in the first book and it shocked a lot of people. I killed Ned because everybody thinks he’s the hero and that, sure, he’s going to get into trouble, but then he’ll somehow get out of it. The next predictable thing is to think his eldest son is going to rise up and avenge his father. And everybody is going to expect that. So immediately [killing Robb] became the next thing I had to do."

— The theological system of Westeros is very poorly defined and elaborated. It's a henotheistic system with old gods and new gods, there is a lot of praying to and invoking of those gods, but by the beginning of season 2, that's really all we know. For an aspect of life that is so frequently emphasized, it is curiously underdeveloped. In terms of cable TV blockbusters that are of interest to historians of religion, Battlestar Gallactica is far superior.

— The plot line of Denarys seems like it should be an Orientalist parody — porcelain-white woman with long, flowing hair ravished by the brutish cheiftain rises up to captivate and lead his people after his death — but I don't have the impression that it is anything but an earnest Orientalist abuse.

— The Dothraki word for I is ana. Borrowing from Arabic?

— I finally get this joke. And yes  (especially now as I am going through and fixing the footnotes in my book manuscript) there is tremendous appeal to a Dothraki citation system: